Vasco, Goa: Hyderabad FC registered a 2-0 victory over Csaba Lazlo’s side in an entertaining clash in Vasco, on Sunday. Fran Sandaza opened the scoring for Hyderabad in the 28th minute while Joel Chianese came off the bench to double the lead in the 83rd minute and hand their side a crucial victory in the race to the top-4.

This win pushed Manolo Marquez’s side to the 3rd place in the points table, with 22 points from 15 games.

Hyderabad FC came into the game with two changes from the previous XI, which saw Fran Sandaza handed his first start for the club. And the experienced Spaniard started the game in fine fashion, winning most duels thrown at him. He won a couple of dangerous free-kicks and never allowed Chennai to settle down before finding the back of the net just before the half-hour mark.

The opener came from Akash Mishra’s throw-in that was worked well to Joao Victor in the midfield. The Brazilian put in a neat through ball for Sandaza, who made no mistake from an acute angle, to score his second goal in two games. Even as Chennai started to push high up, Hyderabad’s backline saw off the danger on a couple of occasions to take their side into the break with a one-goal lead.

The second half saw Manolo make quite a few substitutions as Halicharan Narzary, Chianese, Roland Alberg and Sahil Tavora all came on not long before the break. This meant that Hyderabad lost a bit of control of the game and could have easily lost their lead as well.

Eli Sabia and Fatkhulo Fatkhulloev hit the woodwork in the span of less than 10 minutes while Edwin Vanspaul and more notably, Rahim Ali, missed clean chances to bring the visitors back into the game.

But Hyderabad did not let their guard down and managed to find another goal, as smart work from Narzary gave Joao Victor space in the midfield to pick his pass. He sent Chianese through for his second assist as the Australian attacker found the far corner with precision to double his side’s lead with less than 10 minutes to spare.

Chennaiyin FC will rue the missed chances but Hyderabad will be happy with the clean sheet. Incidentally, this is also the first time the HFC have pulled a double over a club in the Indian Super League, as they finished off an unbeaten month of January with a crucial victory.

Asish Rai, who was adjudged the ‘Hero of the Match’ was ably supported by his backline of Odei Onaindia and Chinglensana Singh along with Akash Mishra, all of who have been consistently impressive this season. Aridane Santana, also put in the hard yards while Hitesh Sharma, Joao Victor and Alberg coming off the bench were smart with their midfield duties and played a huge role in this victory.

Hyderabad FC are back in action when they host NorthEast United FC, at the Tilak Maidan in Vasco on Sunday, the 7th of February. 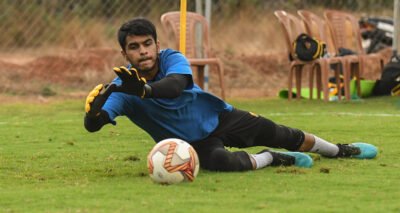